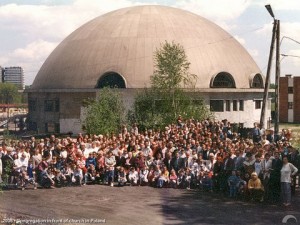 Jan Pregowski has three loves: God, his family, and – of all things, but to our delight – Monolithic Domes! Jan, a 53-year-old native of Poland, first heard about Monolithic Domes in 1985. Since then, he has worked on more than a hundred dome projects in various countries, including several in the United States.

He especially likes American projects because they provide a daily opportunity to use what Jan calls, “my not-so-good American English.” He said, “I learned American English in school. I always liked American English – not Oxford English. But then I not use it for eleven years, so I forget. But in three months, here, many words come back. So I start to talk in English more and more.”

A turning point: learning of domes

Jan believes that he, his wife Izabela, his daughter Angelika, and his son Beniamin realized their dream of a dome home through prayer and two relationships – the first with the church they attend in Katowice, Poland; the second with Barry South of Dome Technology, Inc. and David South of Monolithic Constructors, Inc. According to Jan, here’s how it all happened:

Born in Warsaw, Jan continued living in that beautiful capital until he married. Then, Izabela’s aunt offered to sell them a house in Katowice, so the struggling couple decided to move. Making the move and adjusting proved stressful. Industrial Katowice, with its coal mines, steel works and soot-covered buildings is the very opposite of Warsaw, with its wide, immaculate boulevards and gracious architecture. Worse than that, Jan could not find steady work – only short-term jobs.

The couple continued praying and attending Betania Church, then housed in an old structure that could no longer accommodate its rapidly growing congregation. The church began planning a new building.

When an American visitor told church administrators about Monolithic Domes, they became immediately interested, especially once they heard that the domes were structurally superior and quick to build. After returning to the States, their American friend contacted Barry South, who went to Katowice with even more information about domes.

But despite their wish to build, the church lacked funds. Nevertheless, a deal was struck. The church would finance and send workers from among its congregation to America if, in exchange, they could learn the Monolithic Dome process. The trained workers would then return and build a new dome church.

Jan’s pastor chose him to go – a choice Izabela initially refused to accept. Jan said, “I remind Izabela that we pray one year for God to give me a job. I don’t like for somebody to support me. This is shame for me. I have hands. I would like work. Maybe this is answer.” Izabela agreed, and Jan left for America.

Once here, Jan worked on projects with Dome Technology and with Monolithic Constructors. He said that the more he worked, the more he learned and the more he appreciated “this new technology I could take back to Poland.”

Then, back in Katowice, Jan trained others and helped build a 140′ × 65′ Monolithic Dome for Betania Church – one of the largest church structures in Poland.

Monolithic Construction of Poland and the Pregowski dream dome

By 1994, with David South’s encouragement, Jan established MCP — Monolitycznie Konstrukcjie which translates to Monolithic Construction of Poland. MCP maintains its own website and all equipment needed for dome building.

Recently, MCP completed a two-story dome with a 50-foot diameter and 2500 square feet of living space — the beautiful new home of the Pregowski family. After getting the original plan through MDI, Jan had two of his Polish friends – an architect and an engineer – help with design alterations and engineering specifications. Result: a downstairs area encompassing a spacious living room, den, kitchen with storage, bathroom, sauna, laundry, guest room and office; an upstairs with four bedrooms and 2 bathrooms.

It’s the only dome home in Belk, a village of about 3000 people, with one main road and two auxiliary roads, that’s about a 25-minute drive from Katowice. Jan described their current economic situation as having “many troubles,” because coal mines are closed, leaving much of the population jobless. He said, “They do everything – whatever they can find to make money. Many rebuild houses, do everything what should be done with old house.”

Apparently, building the dome church did not stimulate much interest. Not so with the house. “People came by bus to see,” Jan said. “I don’t know how they heard. Some woman called from newspaper. That was the beginning. Many come and they know about the balloon (Airform). I was surprised. People came and they look at each part — when we inflate, when we spray foam, when we spray concrete.”

Building a dome in Poland

Getting polyurethane foam, rebar and shotcrete presented no problem. Jan said that quality materials needed for domes are easily available and affordable in his area; they also have many building technologies imported from Germany that the Poles use.

But getting local government approval for the dome’s construction proved challenging. Fortunately, after completing the dome church, Jan had taken the time to show his local building official literature describing that structure. It impressed the official, who, a few years later, remembered Jan and the dome. Jan said, „I take all paperwork to him. Many details. It take few months to get all those details. Finally, only one point left – I need approval from Building Institute. But to do it, would be mountain of money for me.

“I had everything else done. But this destroyed everything for me,” Jan said. But he went back, with descriptions of his extensive dome building experience, to see the same official. “He looked and thought,” Jan said. “Then he say, ‘Ah, for sure this is not my business. This is responsibility of inspector,’ and he sign.” Now Jan uses that official approval to get the okay for other domes.

When Jan first told Izabela about his dream for a dome home, she was not enthused. She feared concrete would be just too unbearably cold to live in. Jan said that he basically talked her into it. But after just one typical Polish winter of subzero temperatures, Izabela needs no further convincing. Although they use only their fireplace for heat, the family stays cozy warm all winter. In the summer, they block unwanted sun rays by covering their windows, and the dome maintains a comfortable coolness.

Jan said that his family really likes their new home, and that makes him doubly happy, since he thinks of the dome as an answer to a prayer, a dream come true, and the end result of something he loves doing – building Monolithic Domes.

After seven years of collecting dirt and grime, Jan decided that his Airform needed a fresh, new look, so he painted it using products available in Poland. Since the Airform must be clean and free of oil, he began with a thorough washing. The rest of the freshening process took Jan, working alone, three days. But, he claims, it was well worth it.

During 1991, a war was underway between Iraq and Iran. Jan was asked to go Iraq during this time of political unrest to construct 28 domes. Twenty-seven of the domes were grain storages, 117’ in diameter and 58’ tall. In addition to these, one more 117’ dome was built as a mosque for Suddam Hussein.

With the help of Iraqi laborers, a Canadian dome builder and Jan, it took only 4 1/2 months to complete all 28 domes. Don Stephenson, a worker from the states, taught a large group of Iraqis how to spray polyurethane foam while Jan’s crew hung steel and sprayed concrete. With their combined efforts they were able to complete one of the grain storage domes in just 4 1/2 days!

The mosque was bombed during the present-day war in Iraq by a 5000 lb. bomb. Although the interior will need massive repair, the dome itself is structurally sound. Photos of the mosque after the bombing were displayed in the August 2003 issue of Government Executive in an article entitled “Remaking Iraq.”

Jan said, “It was very hot there. We only got one bottled water a day with water from the Mesopotamia, so at night we ate watermelon and grapes. Well, I must have (eaten a bad) watermelon, because I was very, very ill for 3 days. Not a good memory. I almost died there.”

Jan also recalls having to confront Iraqi military personnel and defend his workers while on the job site. He said, “One time, an Iraqi soldier was talking to (a worker) about the bible. Another soldier came over to the pump where workers were and asked why they were all standing around talking. We were waiting on concrete so (we had) no work to do at the time. The second soldier took up a (pipe) and (threatened) to beat the man.”

Jan continued, “I witnessed soldiers beat workers on one other occasion. At this time, I complained to the man in charge of the whole project. I told him in angry way that I did not want military men on the jobsite or I would quit working and building domes immediately.”

A funny anecdote also occurred at the conclusion of building one of the domes. It is standard dome building procedure to do a final check or walk through of the dome before shutting off the pumps. Jan said, “As I made my last check, I walked outside and gave the signal to the Iraqi by sliding my finger across my neck, signaling to him that the dome is done or finished and the pump could be shut off. He looked very scared when he looked at me.”

Later Jan asked another worker who speaks both languages to explain. The interpreter told Jan the worker had said, “Why Jan want to kill me? He slid finger across throat which means he wants to kill me.” Jan explained to the worker and they both had a good laugh at that misunderstanding.

Note: This article combines information from three stories published in 2000 – 2007.

A Testament to the Dome Shape Freda Parker July 05,…